If you’re on Google+ then #PlusTheZuck – a bit of fun with viral – you would’ve seen many posts in a campaign that took place from 24th February to 25th February 2014, and even the actual hashtag trending on Google+…

When Martin Shervington mentioned on the Friday to me that this was going to take place it was a perfect opportunity to track and observe through NOD3x a viral campaign unveiling in real-time and then analyse in detail long after the moment had passed – an opportunity that doesn’t occur often.

Before you read any further, read Martin’s post “The power of the Google Plus Community: the #PlusTheZuck case study!” to understand the background to #PlusTheZuck – then come back and continue reading…

What is NOD3x – a quick overview? 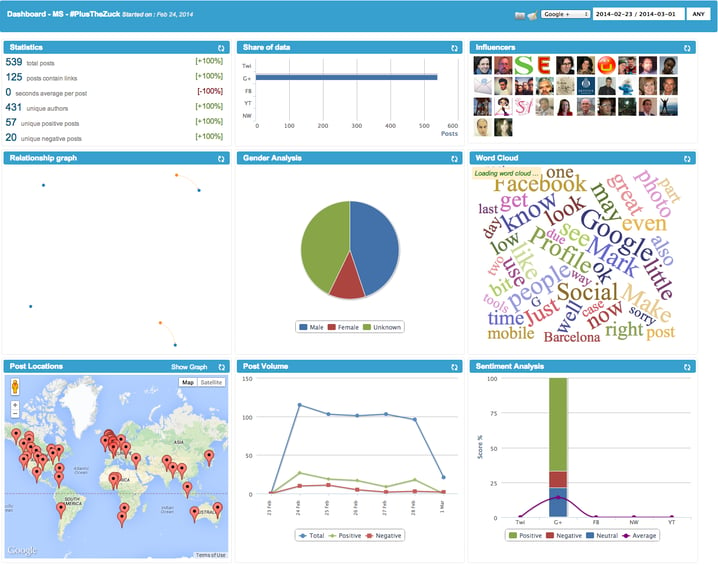 NOD3x is a real-time social network analysis and data mining application that is free to the Google+ community. It can track and index all posts talking about any subject that is made to the public timeline and/or public communities from either personal profiles or Google+ pages. Once we have the data we analyse it many ways:

The data collected and analyzed is then visualized within a real-time infographic dashboard, where a user can see at a glance what is taking place.

How do these insights help us understand the who, what, where when and why of the #PlusTheZuck community game?

One additional analysis, not mentioned in the previous list, is our relationship analysis – where we use dots (nodes) and lines (edges) to represent people and posts and the relationship formed between other people when they engage on content e.g. if I reshare, comment or +1 a piece of content it forms a relationship (albeit temporary) between me and the person that posted the content.

However what we also observed is that there are multiple spin-off’s from this main cluster but still connected to it from re-shares AND clusters forming that were not connected to Martin’s original post.

In order to get a better understanding of what happened we’re able to separate out the re-shares, comments and +1s that will show us additional insights into the three types of engagement activity:

On NOD3x, re-shared posts are shown as green dots (nodes). This view of engagement activity isn’t dissimilar to Google+ Ripples; where we can see which posts created the most re-share activity.

We lay out our ‘re-shares’ graph as a continuous link from the person who posted the original post right down to the last person that re-shared.

You will be aware that re-shares of a post increase a posts reach each time it happens. However, not all re-shares are equal as each follower network responds differently to content that is shared with them. There are of course other factors that affect how people interact with re-shared content and I call this the 5 W’s of Viral Understanding:

I’ve observed that those people that followed this attained a higher level of engagement on their re-shares than those that did not:

Mark Traphagen’s and Dustin W. Stout’s posts clearly laid out why their followers should be involved:

Where as these re-shares didn’t: 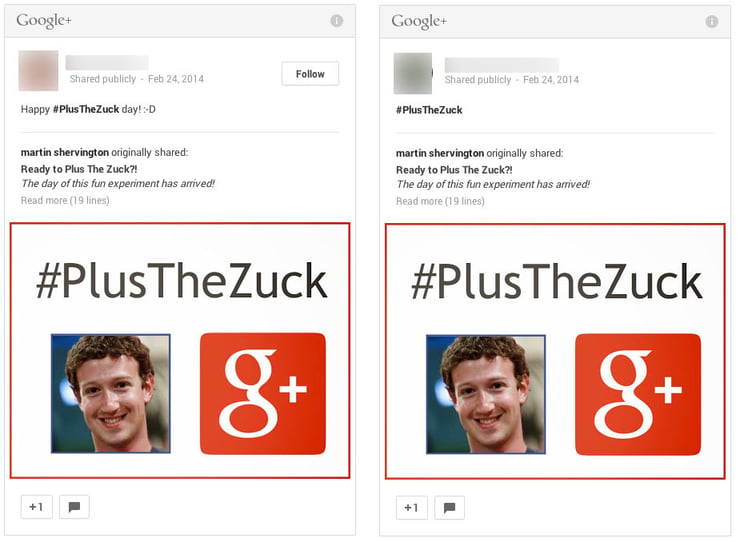 With NOD3x we identified that those posts that followed a majority of the 5 W’s received higher levels of engagement (indicated by dark green stretching out further than main cluster in the graph below.) Approximately 50 people appeared to be in Martin’s initial seed group 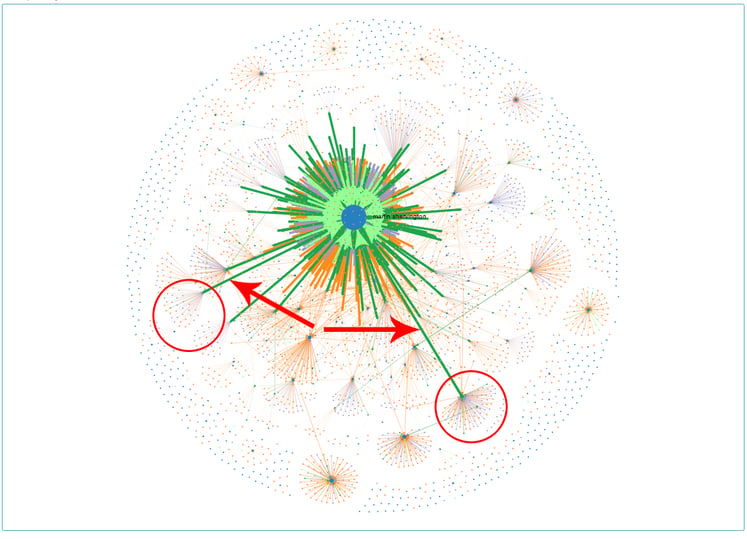 What can we learn from those people that only commented or +1’d?

With NOD3x we can separate out all of the various forms of engagement – you’ve seen the re-shared graph above and the following +1 graph tells an interesting story – that there were several people that saw more than one #PlusTheZuck post. We know that because there are orange lines –(edges) that connect and unite the other clusters together. 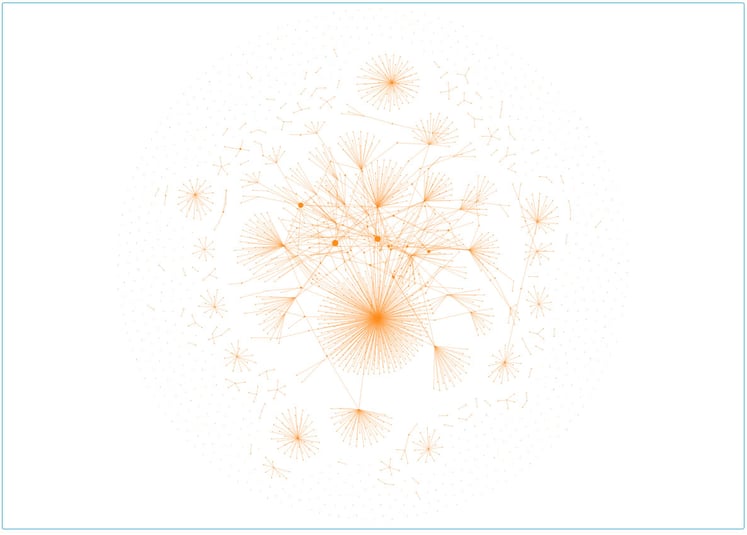 Why is this important to know? Well there were a far greater number of +1s than any other engagement (+1 activity accounted for 50.16% of all activity)…imagine if a fraction of those people we’re motivated to comment on other #PlusTheZuck posts – the following graph of people that commented on #PlusTheZuck posts would look very different: 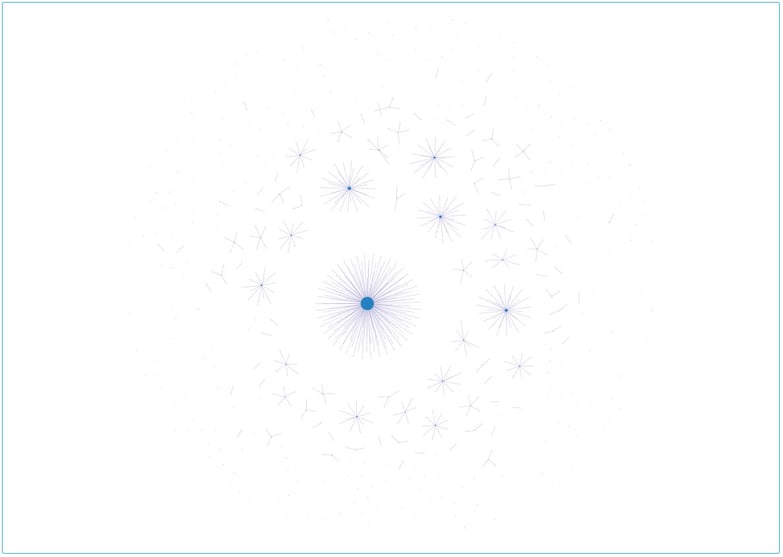 Over the period many hashtags appeared along side the #PlusTheZuck – some were used purposely to associate related content. Some posts were automatically tagged by Google+ as being possibly related content 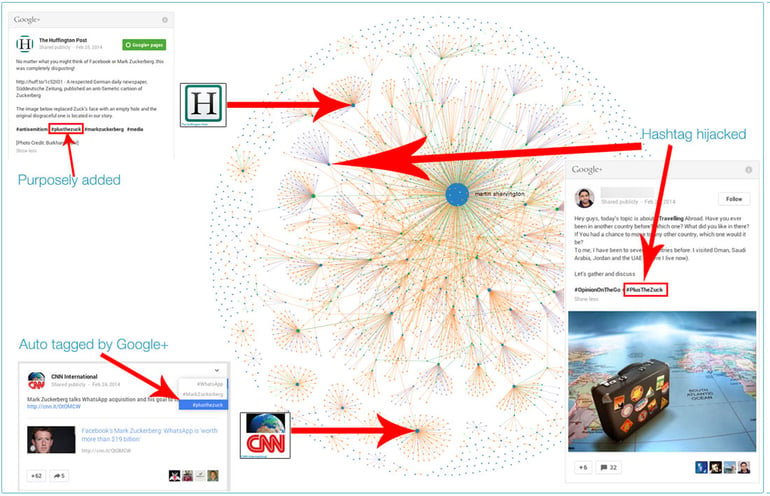 From all the posts we indexed there were 4 variations of the #Hashtag:

All hashtags that were used in posts – either purposely or autotagged are as follows: 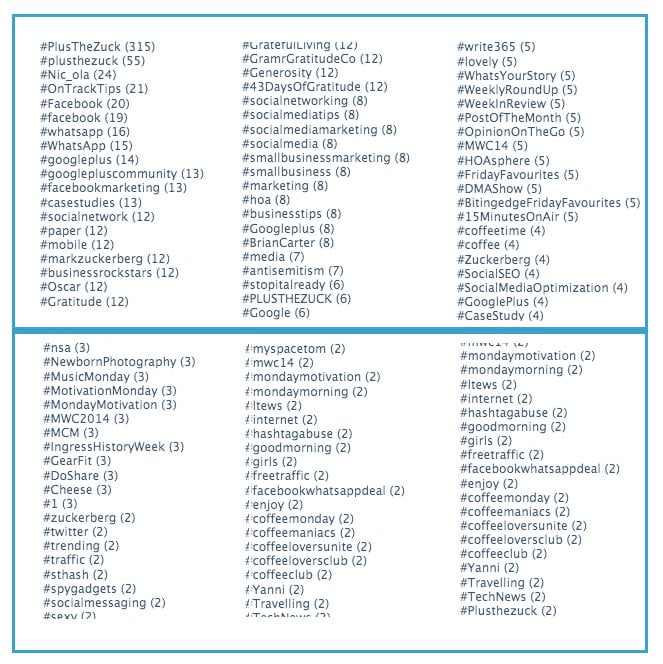 It’s fairly easy to spot those that are abusing hashtags in order to try and gain more eyeballs on their content!

When is the right time to call it a day? 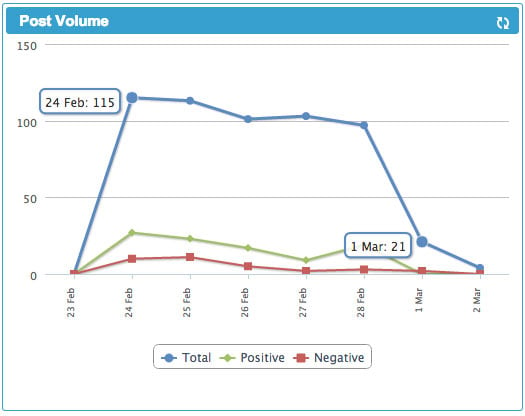 This shows that although the people that were involved over the first 2 days interest may subside other people are beginning to see the content for the first time.

The volume of posts that contained the hashtag was fairly stable from 24th February until 28th February. Then it dropped to approx 20% of the previous daily volume on the 1st MarchTherefore, when running viral campaigns it’s important not to cut it too short too soon …

What can you take away from all of this? If you’re planning on a running a viral campaign:

We hope you found that useful and get in touch with us here to discuss using Google+ for business.