Have you tried virtual reality yet?
Well, if you haven't then you cannot imagine 'how real' it may be.

In the past 6 years I have lived on the road travelling between the tens of cities in UK, USA, Brazil, Kazakhstan (to name just a few).
I've interviewed literally hundreds of business owners, gathered data and insights, as well as having the good fortune to make hundreds of new friends.

Along the way I've introduced a lot of people to Virtual Reality (VR).

Here is an overview in my Almanac if you want more info on headsets etc.

Most recently a friend recommended I check out an one of their old colleague's AirBnB listing.
Three weeks later, and part of the furniture now, I receive this image: 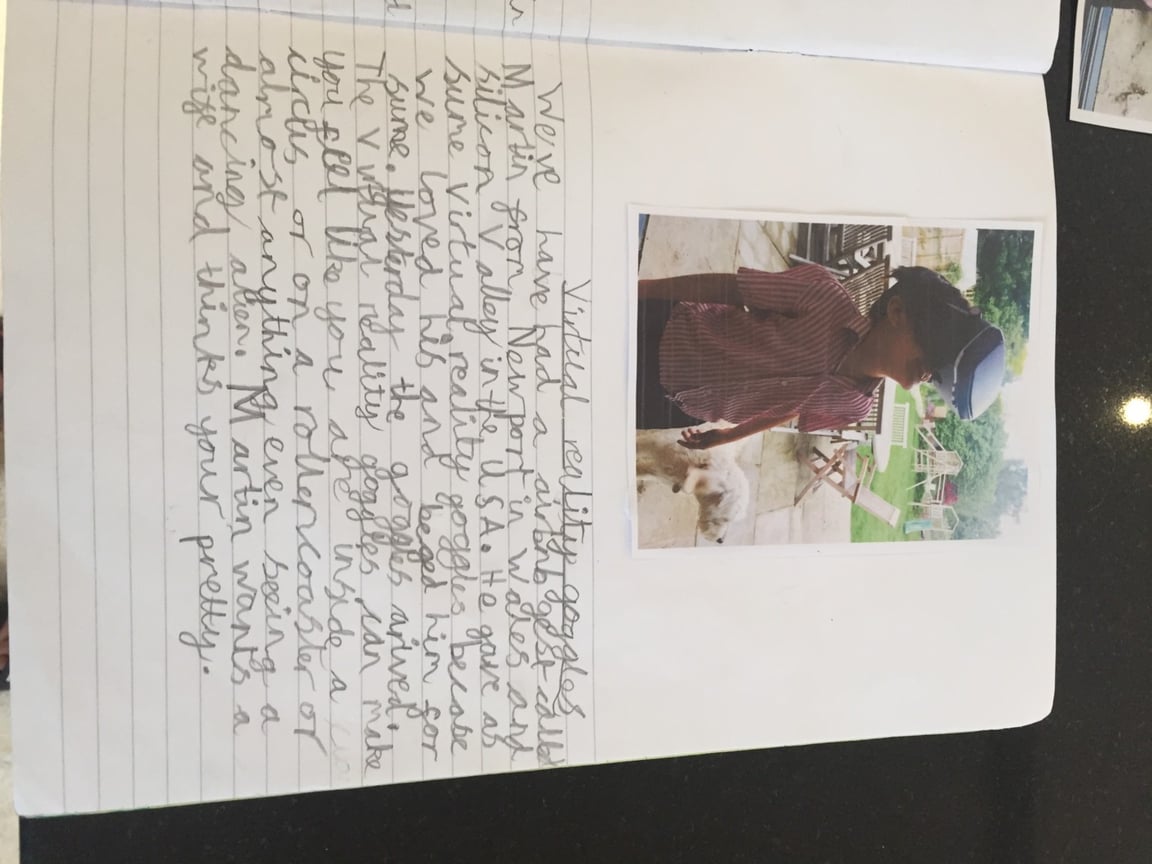 Which I think is hilarious, especially as this journal will be marked by his teacher.

Seeing people's response to VR, which is usually 'WOW', I know this is a trend that is going to fly. 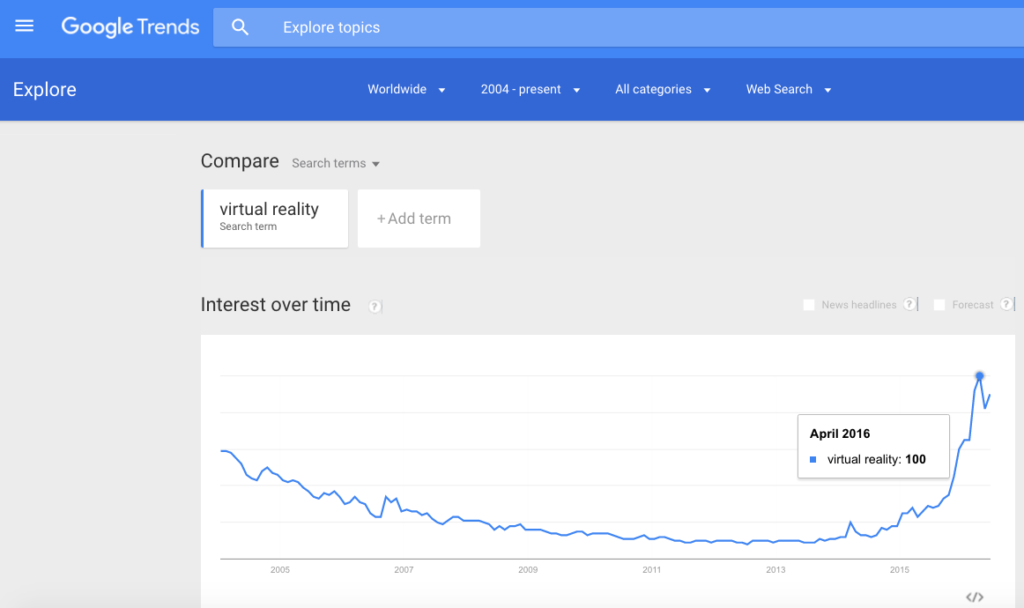 At Social Media Marketing World 2016 myself and Travis Taylor filmed a series of interviews using a 360 camera, perfect for Virtual Reality. What I didn’t expect (but should have done) was some people’s response to the assumption it was ok to film them. On one occasion, we pretty much just turned up to a table, dropped down the camera and started chatting. For two people already seated, that action activated springs on their seats, as they leap away.
I made an instant decision to remove the camera, and brought them back for a chat without it instead.
This did, however, make me realise the world may be about to change rather quickly.

In Steven Levy’s book on Google, called ‘In the Plex’, he says that Google are building a ‘mirror world’.
That is, a digitized version of this world.

It won’t be long that public spaces will be filled with 360 cameras live streaming to YouTube (there are ways to do it already) and Facebook.
This means that you will be ‘in VR’ i.e. recorded live, and that footage will be saved and already uploaded to YouTube.
This is going to be the biggest of shifts, with affordable cameras already having that ability.

You will be able to ‘pop up’ in Times Square, or watch the sun go down in San Diego, with as little $4 headset, or even just using your phone to watch as 360 video.

So just as the telephone enabled us to connect using voice, MSN through text chat, Skype through one-on-one video calls, Hangouts being 'one-to-many', Hangouts on Air being 'one-to-many' live events, etc. - now 360 videos will give you the next leap - teleportation, with you being 'in the story'. In fact, as soon as the low priced cameras become a little higher quality, we will find VR platforms for everything from counselling through to 'adult themed rooms', but I will stick to business.

Want tips on filming? Click here for some guidelines we found out during the process.

Last year I attended an event featured in this documentary:

When someone has a film crew around, with them asking you to sign a waiver form for them to use the footage, it is obvious you are accepting 'being filmed'. But that same day I was walking down the street in San Francisco, and someone was holding their camera and recording - Periscope being at its peak at that point in time. Live streaming video is happening more and more. People worried about privacy when it came to Google Glass, but now there are billions of recording devices.

There is a whilst issue when you are 'in VR' too - with subtle tracking leading to more granular data then on desktop or a mobile device.
Read FCC head Tom Wheeler talking about that here.

This year I also attended GDC (Game Developer Conference) in San Francisco earlier this year where I walked up to a booth run by an spinoff MIT project: http://www.affectiva.com/

Make this picture bigger and you’ll see their facial sentiment software tells me I was ‘surprised’. And I really was. (and based on a quick conversation with their team, anyone can access and use this software). 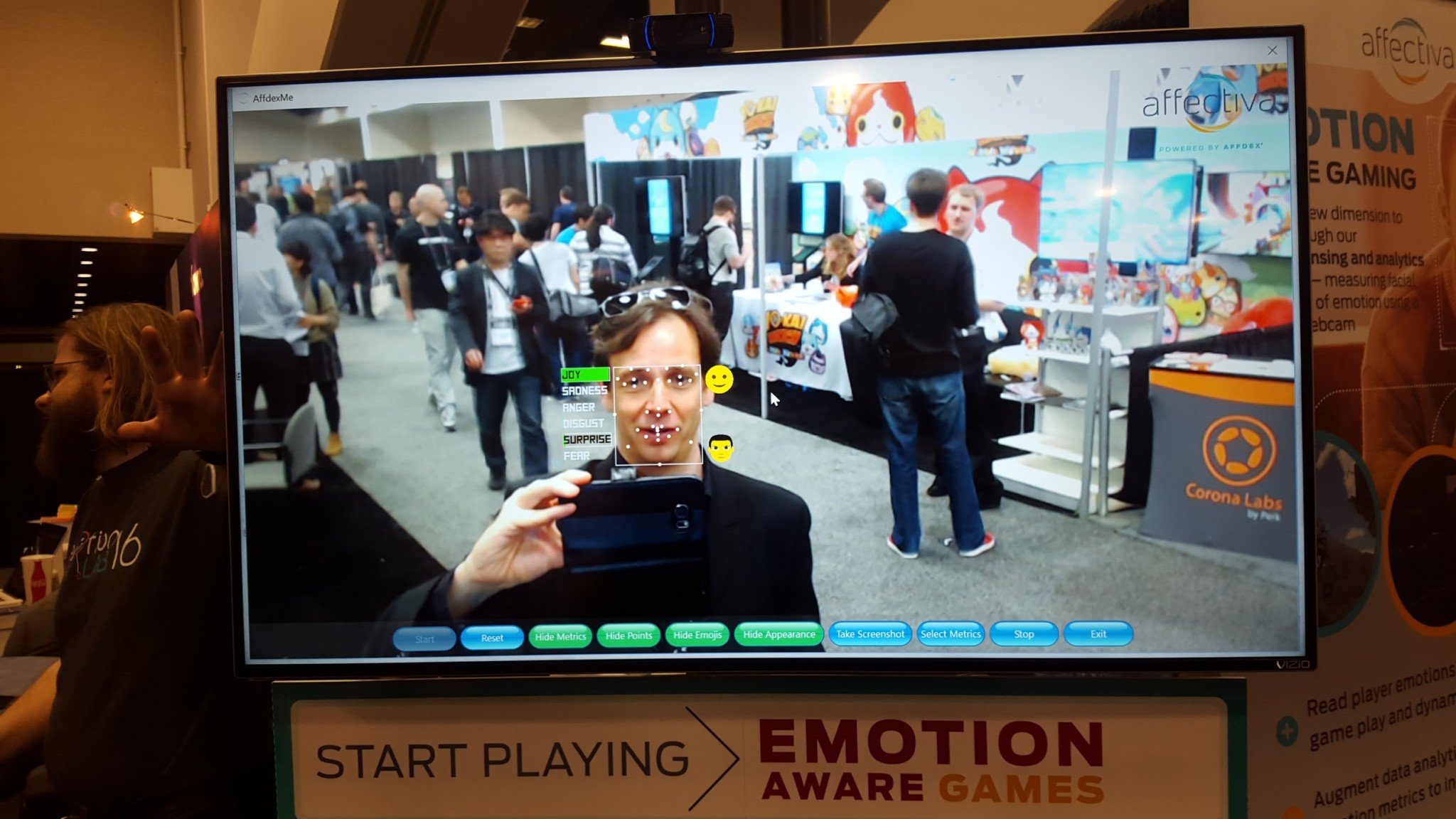 This is now, and just think of how this could be used in any live video situation - as well as recordings, or even historic data on YouTube from all those hangout on air interviews you’ve done. As soon as computing power is available you could, for instance, do the following analysis:

Take any photos uploaded into the cloud (date stamped, and so often auto uploaded now)
Match any YouTube videos recorded live
Correlate with Search Enquiries made at that time/day (inc. those you do in an incognito window)
Correlate with posts/comments made across Social Media, and then
Create a historic emotional pathway for that time period based on all that evidence

And I wonder if there will be a new game, Russian Roulette with your spellchecker. I think people should be able to come back in time and watch the words as they are being written on the screen in front of them, all stored 'live' in the Cloud, and accessible from the future.

Time travelling AI will know much more about you than you may have realised; let’s just hope it is friendly. 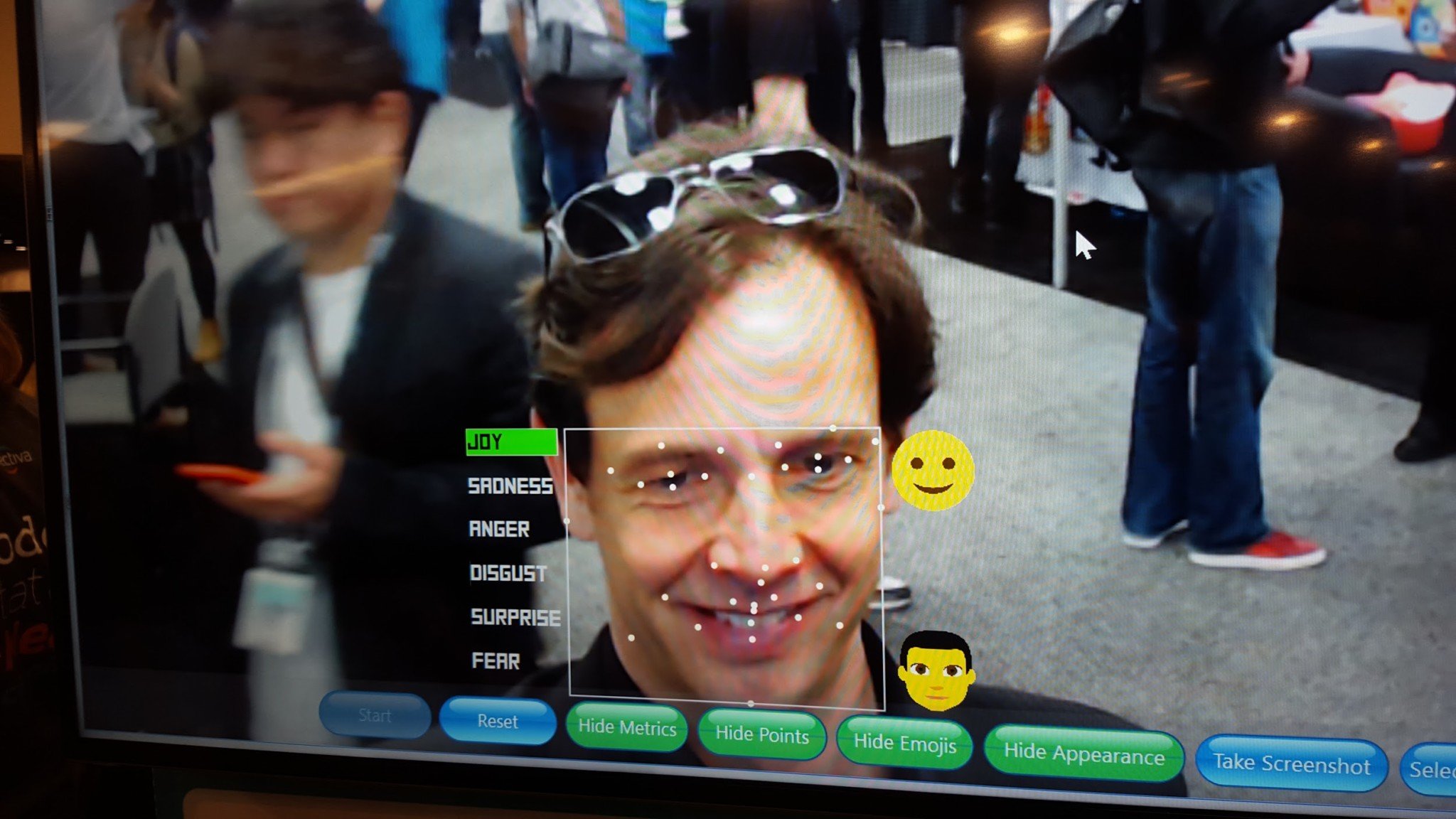 Check out Affectiva (demo in App stores). It's from a team out of MIT, and apparently we're going to have more socially aware robots coming soon too. So we should be able to see them smile, just before they takeover :D

The world is making the choice right now, it is exciting, and it is scary.
And having been researching this throughout my time in California, I truly believe we are quickly taking the first steps into a new dimension for humanity. As Kurzweil says, “We didn’t stay in the cave, we didn’t stay on the ground and we didn’t stay within the biological limitations of our body.” -Ray Kurzweil, Transcendent Man
The values of 'community' are what I am seeing emerge more and more for local businesses, and I think VR could be a way for more people to join the party.

Very soon I will be releasing loads of 360/VR videos, so watch this space for those too...