As a 16 year old, in the summer of 1989, I worked in a crisp factory (that’s ‘potato chips’ if you’re from the USA) located in Newport, South Wales. During that time, and the summer afterwards, I learned many things - including how many times you hear a popular song on the radio throughout the day (‘Pure’, by the Lightning Seeds still makes me feel good). I also learned how a factory line is put together as I moved from role to role, experiencing everything from the need for a constant flow of potatoes ‘of a certain size’ at one end, to the ‘cooking’ in hot fat at the next stage, to ‘inspection’ of the cooked (and boiling hot) product, next on to flavouring area (where I accidently contaminated one batch with cheese and onion flavour when they were meant to be beef) through to bagging and ‘packing’. It was at the bag packing station that I learned a big lesson. 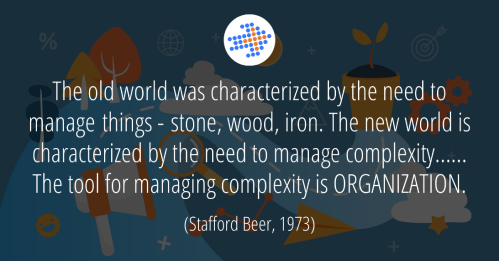 Packing involved taking the single bags of crisps and adding them to a box of around 48 bags. The women with whom I sat on my first day place a box next to me to my left, with the conveyor belt to me right. They showed me their technique of picking up a pack in the right hand, and passing it to the left before the left hand placed it in the box. This ‘passing from hand to hand’ was not a logical or natural to me, so I tried other ways and fell behind - with bags of crisps piling up in front of me.
The women knew this would happen if I didn’t learn this new behaviour. They had found the ‘best way’, in this case the quickest and most accurate way to pack the boxes, with the bags all pointing the same way. Putting it simply, the right hand had one job - pass the crisps, and the left hand has another - to adjust its direction of that bag as it went into the box.

What they taught me was simple: don’t attempt to improve on a process until you understand how that process works.

Over time I became very efficient in this task, as I learned to pass the bags faster and landing them in the box more accurately - and as I did so, I could speed up. And the consequence of this was that they would not have to stop the bagging process as there was no backlog building up.

Organise/Optimise in the Digital Space

Clearly, the ‘crisp factory’ story gives us a tangible cybernetic story - the factory line is a well organised, connected system; and my own actions are part of a process with a tangible result, and feedback loop as to when it is working well, or doesn’t. 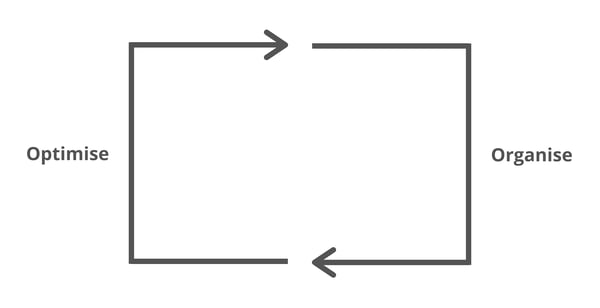 When it comes to the Digital realm, so much of what we are dealing with is ‘invisible’. When we connect one platform to another, we don’t see the connection as much as what function the connection performs in the duty of the overall system. How effective that system is in performing its goal is down to two main (internal) factors: how it is organised, and how it is optimised.

In other words, you seek to organise your resources around achieving that goal that does so most efficiently and effectively.

One key challenge you face as a Digital Cybernetic Practitioner, is removing the temptation to dive into Optimising a part of the process before you’ve properly Organised the elements of the system - everything needs to connect. Also, there is no point in me attempting to pack the crisps faster, if there is a break in the cooking process due to a poorly optimised aspect of the process e.g. if the fat was continuously too hot and ended up burning the crisps, it would result in no crisps moving down the line to be packed, and I would simply sit there waiting.

Here is my soundbite of advise:

Don’t attempt to Optimise a process until it is well Organised.

The loop below give us a starting point of how to think about a cybernetic intervention: 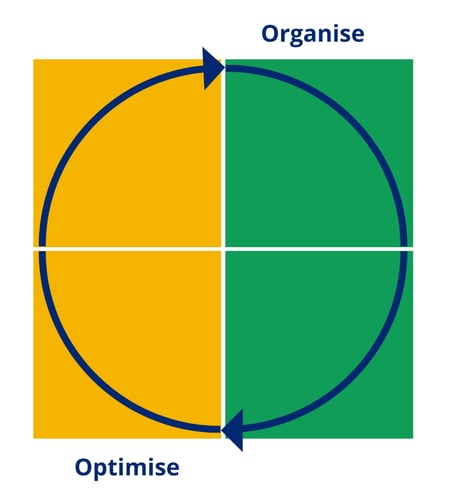 Think about it this way, you can organise and optimise 2 things:
The first is ‘Internal Resources’ (meaning internal to the company), and by this I primarily mean ‘People’.
The second is ‘Systems’, and specifically I mean the digital infrastructure. 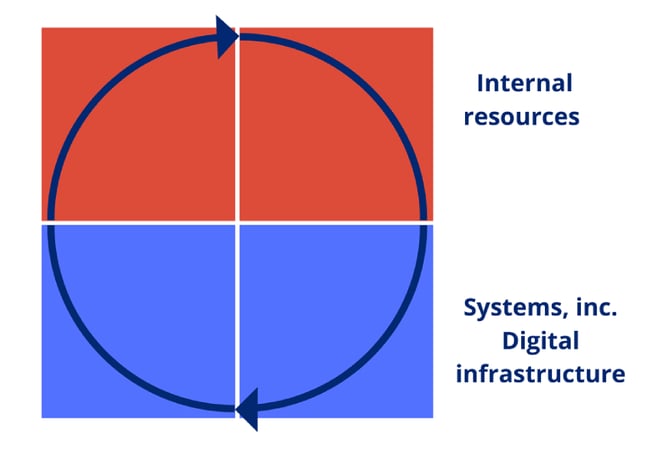 If you then break this down into the 4 quadrants, you’ll get the following: 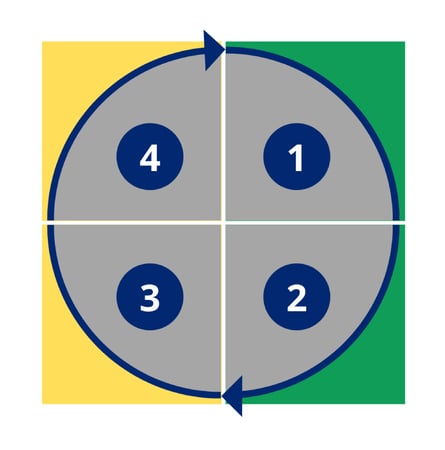 This is the process we tend to follow in our thinking on projects - starting on the upper right, and moving around. Then circling through the cycle again: Better Organisation so that the Optimising process is more effective.

In this way, ‘Organisation’ creates the foundations for quality testing and adjustment of the course of the business. If you know ‘how things are put together’ you have a far more accurate map as to what levers in the business are actually making a difference when they are adjusted.

And it is when you add in ‘structure’ to the organisation process that it becomes far easier. ‘Structure’, more than process, is what you need first when it comes to ‘Digital’ (think: Digital infrastructure) - especially, connected systems will allow your processes to flow.

The organisational component of ‘structure’

If structure is at the heart of Organisation, then how should you begin thinking about it?

Let’s dive into an exercise that will get you thinking...

Imagine you are given a job to improve the output of a business.
The business exists on a plot of land that looks something like this: 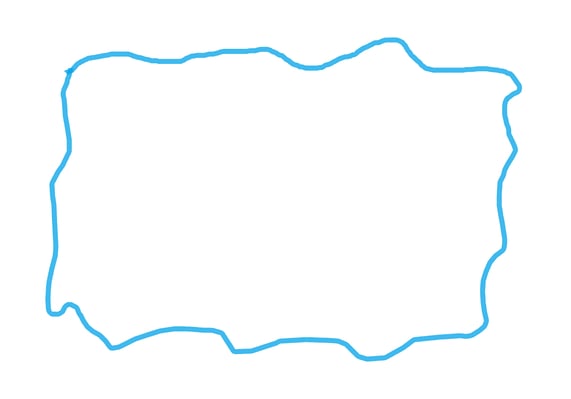 The business output is to produce 5 different types of plants/fruit/vegetables, that we will call A/B/C/D/E

Up until your arrival, the presence of A/B/C/D/E has been randomly spread across the land, with very mixed results. Some of A/B/C/D/E have thrived in their location, whereas others are struggling for survival.

Your task has been to improve the overall output of each and every one i.e. A/B/C/D/E all need to thrive for your task to have been completed successfully.

Now, the terrain that you’re operating in has different a) volumes of rain, b) drainage, c) sun exposure, d) types of soil.

The first step in performing your task is to put together a plan on how best to approach this situation. BUT before you begin, you get to ask 3 questions from the busy owner - and you ask…

Pause here to have a think what you would ask…
Once you are back, you may ask things like:

What timescale am I operating on? (i.e. do I have to increase output in 1 month, 1 year, or 5 years)

Do I have a budget to erect greenhouses, or improve drainage/irrigation?
What is the output from the existing approach taken?

There are probably loads more questions you could ask, but these 3 should get you closer to the task at hand.

Next, what is the first thing you are going to do?

My suggestion would be to overlay a structure onto the area in the form of gridlines, and then a) assess the presence of A/B/C/D/E in each area, and then b) assess the conditions (rain, drainage, amount of sun etc) of each square, and then c) perform a further assessment as to whether each of the squares (20 in total) is performing ‘well’ for that particular crop. 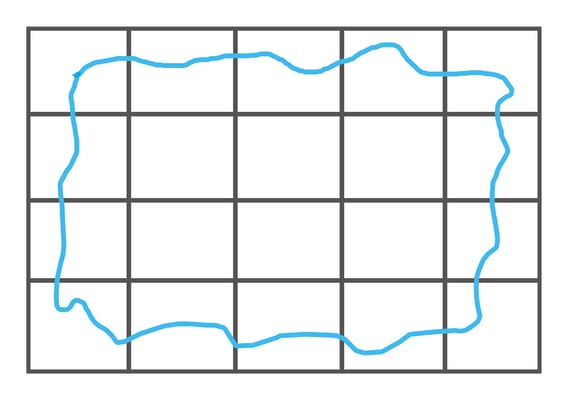 Once you have some idea of the terrain, and its performance, you can begin to consider any interventions.

This surveying process, as you will have guessed, is the first step in understanding a business’s digital terrain. It is not only about the environment, but also about the current productivity levels and outputs; it’s also about the potential. Spotting the potential is possibly the most exciting aspect of being a Digital Cybernetic Practitioner, and will often emerge as you near the end of this first stage.

Once you know what is going on, you can move to the next stage - which was your original brief - to improve the outputs.
To do this, you still don’t want to rush in as there is another stage of Organisation that can occur first.

How can you approach the problem in a way that is most efficient?

Should you consider A/B/C/D/E each, in turn? Could you bunch e.g. A and C, or D and E together in relational to their optimal growing conditions?
Or would it be best to consider each block and the blocks connected to it?
Or...what other approach would work well? 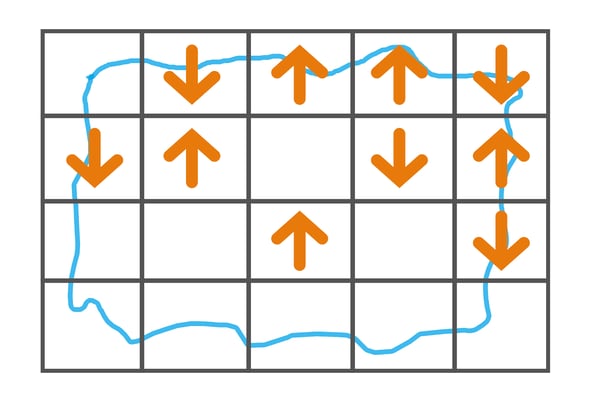 Now, here is where you would ask a lot more questions - and probably really want to understand the ones around ‘costs’ if you’re looking at building/draining work. But once you’ve completed the process, you will begin to look at how creating better Organisation actually results in Optimisation. This is a really important aspect for you to understand, it is through the act of Organisation that starts the Optimisation process, hence why we need to focus on organisation first.

Think about if you’d just dived into this problem, and started to tweak ‘parts’ instead of thinking through the ‘whole’ and its structure first. It is the structuring of your response to the problem/situation that will help to create the order you’ll want to make the optimisation process scientific. This is of course the end point - not only to improve the yield of A/B/C/D/E, but also to know the reasons behind the results.

This approach, using a 6 step scientific methodology, allows you to form a hypothesis and follow through as if each intervention is an experiment. And business is of course an experiment, with ‘success’ and ‘failure’ of achieving the GOAL of that business vehicle being the results.

If you are looking to get more organised, then start thinking about how to structure your business, or your role within the business.

There are so many areas of a business you can give structure, from your ‘Daily Tasks’ to ‘Deal Management’ to ‘Out-bound calls’ to ‘Presentations’ to ‘Proposals’ to ‘File and Folder Management’ etc.

You already know what organised looks like. The real question is are you able to map the entire business to be able to work out which areas could benefit the most from ‘organisation’, and give a boost to performance as optimisation results?

If you take on the role of Digital Cybernetic Practitioner, you’ll want to see the whole, overlay a structure, and then work out the most highly leverageable changes. It’s a vast domain, but with structure you will often find the solution to the Organisation/Optimisation problems.

For anyone working either in the Digital Marketing space, or works with people and...

An Introduction to Digital Cybernetics for Business

The secret to a website properly optimized for search engines lies in the excellent use of...