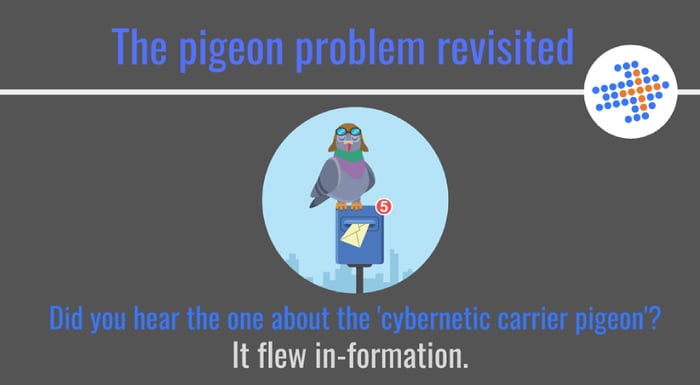 Let’s revisit the concept of a ‘Goal-Directed System’.

When a ‘goal’ is baked into the system, the purpose of the system is to enable the achievement of the goal.

A joke (or ‘comedic puzzle’) has the answer baked within the question - the ‘reveal’, in other words, is a surprise to some extent (which is why we laugh) but cannot be such a surprise as to alienate from the original premise.

Look at this comedic puzzle:

Did you hear the one about the ‘Cybernetic Carrier Pigeon’?

In order to ‘answer’ this (beyond ‘Yes/No) we can look at 3 pieces ‘baked into’ the sentence:

Then, when you hear the answer (as ‘hear the punchline’ may be too much!) it resolves.

In other words, it makes sense - or, you understand it for what it is.

In the written form, I’ve adjusted the final word to ‘in-formation’. This allows for both meanings to exist simultaneously with greater ease i.e. ‘information’ and ‘in formation’ whilst not favouring either.

The creation of two meanings simultaneously (within your mind) is a consideration for human consciousness, but that story may be for another day.

Within this context of Digital Cybernetics, we can see how the structure of the first sentence (“Did you hear the one about the ‘Cybernetic Carrier Pigeon’?”) determines the reasonableness of the second sentence in delivery of a satisfactory ‘resolve’ (“It flew in-formation.”)

The original pigeon problem I wrote about earlier was simply:

Do carrier pigeons fly in formation?

And without ‘a frame’, which in turn generates a goal (i.e. “this is a puzzle to solve”) you can only answer at the surface level - the answer, as was correctly answered by Brandon Schaefer when I asked it, “No, they don’t fly in formation”).

Which leads us to the point…

Unless there is sufficient information stacked into the question you ask (as is the case with our ‘Cybernetic Carrier Pigeon’), as well as ‘obviousness’ in how the results are displayed (i.e. using ‘in-formation’ as the word”), you are going to miss how the system is working:

Input and output; question and answer; action and response - all of them are about how information flies throughout the system.

The question for you is: how can you connect the aspects of the system so that the answers it delivers are understandable?

The reason to create ‘Business Process Maps’, for example is in order to model out how information moves through the system - which allows ‘goals’ to be added as an integral layer.

Remember: unless you know how a system works, you won’t be able to work a system.

And please don’t be scared of manipulating systems - you’ve been doing so your whole life, the only question is how successful you are at doing so.

Think like a machine: Develop a goal-directed system in business

The 5 levels of Digital Organisation

The artificial intelligence movement has made its self a prominent source of performance and...